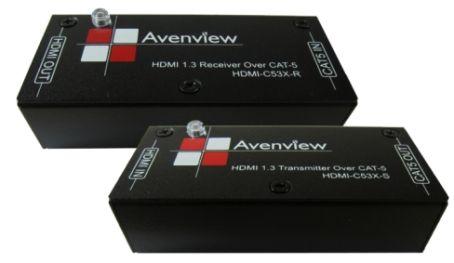 The HDM-C5-3X-SET device consists of two parts- Receiver HDM-C5-3X-R, and Transmitter HDM-C5-3X-S. The Transmitter takes the input HDMI/DVI signals and sends them via RJ-45 connector to CAT5/5e/6 LAN cable. Then sent TMDS multimedia data is being equalized by the Receiver. Signals can be sent for up to 200ft under HD 720p/1080i, and up to 130ft under Full HD 1080p. Users can adjust the strength of equalization to the received TMDS signals and optimize transmission distance between source and display by using 8-level equalization control knob on the receiver.